Get smarter and more spontaneous

”Memory”: a game retro style and very popular amongst children. It is almost certain that the little ones easily beat the adult. But why and what could be the reason? This game is a little different compared to another well known game, the mine-sweeper game because the difficulty is not found in maintaining one-self concentrated but in the ability to release stress, be spontaneous and present. The word “memory” associates directly with the memory functions of the human brain. The human memory is found to degrade with stress and anxiety over prolonged times of exposure. One of the best remedies to combat stress is meditation.

This game was made and based on 3 objectives: to have a little fun; a tool for checking out the stress level and finally playing with the minds capacity of recognizing and remembering a human face.

The first tool of the Zen practice is concentration. The goal is to confront the reality perfectly spontaneous - like a child.

No particular skills are needed to play the game it is completely intuitive.

How to play the game

We start playing with a board completely covered. Poking one of the cells, will un-cover a face that will stay visible without further clicks. Every time we touch (click) a cell, a face of a person will be revealed. There are 8 pairs of faces in total hiding in the game-board randomly placed. The objective is to match all faces. Matching has to be done in 2 consecutive clicks. Not making a match in the second click will make current as well as the previous face appear for a second and then becoming covered again. On the other hand, if the face of the second consecutive click matches the first face, both faces will become permanently uncovered i.e. stay visible until the entire game board is uncovered and the game is won.

The Counter and the Clock

The click-counter and chronometer were introduced to induce a sense of competition to stress the player thus simulating the real world we are living in. These devices certainly make playing more difficult. It is therefore a healthy challenge overcoming the natural instinct in “winning” - that is being able to ignore these watching eyes being present and focus on the game, hence play the game perfectly spontaneous. The counter and the chronometer may also be used when playing the game with a friend.

This is what you'll see 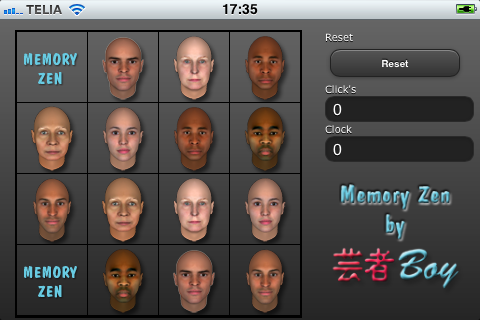 Go and enjoy it

The application is not free. Please consult Android Market and App Store for pricing

﻿
GeishaBoy
Specializing in mobile clients with database access i.e. "app's" and mobile web with database access. We develope complete systems with data base access with focus on the dynamics aspect on the client side as well as operations and maintenance aspects in the back-end systems. You will be able to run and maintain your applications from smart-phones and pads.
MORE ABOUT US
The Geishaboy team has long experience from the IT- and telecom-sectors. We have experience from development of computer architecture, computer design, compiler development and programming languages and lately the www from when it all started.
ADDRESS
Timsforsvägen 10.
122 47 Enskede. T-Bana: Stureby
Stockholm, Sweden
Telefon: +4672-7000039